If you'll be given the responsibility of executing random people in front of you, who you only met right there and then, what will be your basis?


Circle is a movie I just watched last night on Netflix and it brought out the interest in me to write this review. The plot revolves around a group of people randomly selected by aliens. They were housed inside a spaceship where they stand next to each other forming a circular pattern. No aliens were shown in this movie, just the people and the killing technology that binds them. It was an interesting movie because there were no flashback scenes provided. Only individual stories unveiled through series of conversations and debates that can last a minute. 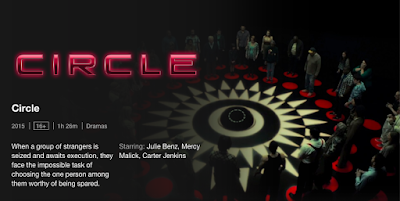 Each minute, the group needs to decide who dies by voting that particular person. In case of a tie, the group needs to recast their votes. And in the event where the group failed to decide on a tiebreaker, both will be killed. If ever a minute has passed and the group chose not to vote, the killing machine will randomly pick a victim. If someone volunteers to be next, he/she may freely step out the circle and be killed.

During the entire film, a lot of issues were pointed out giving the group their basis on who needs to be voted next. Issues such as age difference, gender exclusivity, racism, physical incapabilities, moral obligations, and perpetual purpose to humanity were tackled.

In the end, only one has to survive per ship/circle. Strategy ruled the game. If you pity, you die. It is a struggle between surviving and choosing. One must be good at selling, uncovering mistakes, and making allies in order to be freed.

In reality, life is [indeed] a battle. One needs to survive by proving himself/herself that he/she is worthy to be spared from execution. In today's world where standards made were all based from personal opinions of what is right and holy, being worthy is questionable. I would always say that morality, though perceived as a universal truth, can still vary based on beliefs. Morality can still be fabricated in order to accommodate human convenience. And at the end of the day, it is a question why one needs to show worthiness and why everyone needs to judge others.

Execution isn't just about killing your own kind through concrete and absolute decision. Execution can also mean being able to single out an individual in emphasizing his/her wrongdoings in public venues. It can also be about creating a policy that excludes certain types of people, which cut their ties from the core and limit their rights to enjoy privileges. The movie is a reflection of a judgmental society who's willing to execute people by means of throwing mud at others for them to appear clean. Survival of the fittest is a dirty concept where the survivor is, most likely,  the most unworthy.

Photo source: screen-captured on Netflix
Posted by Artistmat a.k.a. Matthew Sanchez Chua at 6:17 PM No comments: