There are new changes happening in my YouTube channel since it's time for me to o fully utilize the platform.
Changed my YouTube channel's name from "artistmat" to "Vibe with Artistmat". Primarily been using this channel in uploading video lectures for ViBe (Virtual Benilde), but because of the new direction - adding various segments other that video lectures, it's time for a change. Thought this through a lot and I openly embraced the idea of a change in name to give emphasis on the kind of channel it will become. One consideration is to retain the branding and to add prefix/suffix. The second consideration is for the name to sound general rather than specific since multiple segments with various themes will be made (this includes various collaborations). 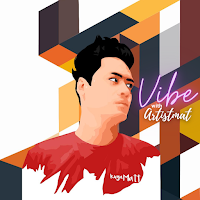 So instead of using words such as TV, Productions, Studio, Vlogs, Gaming, and etc as rightful prefix/suffix... I decided to make use of "vibe" as a compromise between its primary purpose and the new direction.
Catchy, isn't it?
Vibe with me. Subscribe now.

Posted by Artistmat a.k.a. Matthew Sanchez Chua at 11:54 PM