It's been 17 years since I officially entered the blogging scene using the pen name "Artismtat". I invented the name as my official url to then, www.artistmat.blogspot.com (I'm still a college student back then and relying on free domain kept me going). Artistmat eventually became my username to all social media platforms that emerged later on. The move was for me to maintain a unified identity online in which I became successful. Artistmat is now synonymous to my real name when searched online, thus maintaining a strong online presence even though I lay low most of the time. 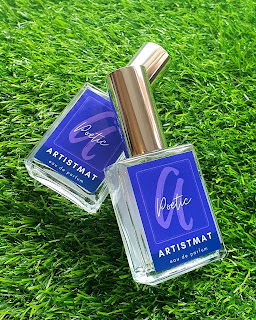 Last year, I posted on my social media accounts pictures of a perfume bearing the said pen name. It was still on its conceptual phase and a lot of processes were still needed to be done behind the scene. And last month, 17th of May, I officially launched the perfume called, ARTISTMAT with its pioneer scent - Poetic. Poetic's scent is subtle, yet uplifting in which I'm sure you'll enjoy as much as I do. More scents will be revealed every 17th of the month and each scent has its own vibe to share with its wearer. I hope that you do support me with this new direction I'm trekking for Artistmat.

it's more than just a PEN NAME now.

It's officially a BRAND.

Posted by Artistmat a.k.a. Matthew Sanchez Chua at 1:41 AM