Youth Leaders for Knowledge and Development: Be Part of the Second Batch

Passionate enough to serve the country? Is leadership, nation-building, and positive change are among those topics, which trigger your interest? Well then, you might be qualified for the second batch of Youth Leaders for Knowledge and Development of World Bank-Knowledge for Development Center and the Ateneo School of Government. 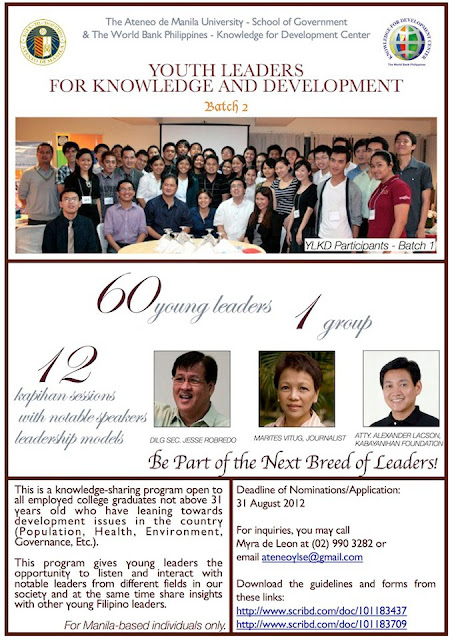 Youth Leaders for Knowledge and Development (YLKD) was previously started as a nationwide search for the 100 young leaders, who will be qualified to participate in the year-long kapihan sessions with top caliber individuals of the Philippines known for their own crafts. Monthly kapihan sessions will serve as a venue for participants to be mentored by these top caliber individuals and to [as well] learn from their own fellow participants.

I was fortunate enough to be selected as one of the top 100 young leaders, who applied for the said program. And I became a witness of how we grow as effective leaders of our own advocacy. Some of us went to other countries as delegates of the Philippines, some of our college colleagues were chosen as top students of the country on various award-giving bodies when they graduated, some became better social entrepreneurs, one was appointed by the president of the Philippines to head an agency, and as for me... I became part of U! Happy Events (a foundation for kids) by consistently volunteering on their events. Later on, I was appointed as one of their leaders, and just recently appointed as one of the foundation's new board members. None of these won't happen if it wasn't for YLKD. I learned a lot of effective ways to become a better leader and I gained connections with like-minded individuals, who are willing to sacrifice their own comfort for the sake of other people's comfort.

Willing to experience what I've experienced? Then start filling out that application form! Deadline is on August 31, 2012 so you better be hurry, young leader! Catch up for the second batch and discover ways on how to be an effective change-maker.
Posted by Matthew Sanchez Chua at 1:11 PM