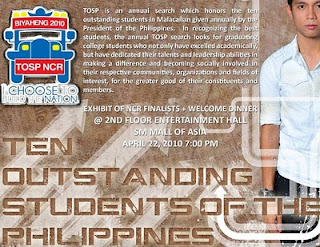 Yesterday, I attended an Exhibit of NCR Finalists for this year's search for the Ten Outstanding Students of the Philippines (TOSP). Mr. Ellis John Mandia (whose picture appears above), my successor, made it as one of the 20 finalists competing for the top ten post. I'm happy that he made it there because it is a dream come true for him to be part of such an elite search, which recognizes top graduating student leaders (college level) in our country.
To give you a little background, I once dreamed and aimed for that particular recognition but I never made it. The school can only choose 2 nominees that would represent the institution. I was never selected to be one of those two, yet I know that I'm part of their list of options. Yes, it maybe so sad on my part not to be given a chance to prove myself as one of the outstanding students, but I do know that God has greater plans for me.

Now, let's go back to the present scenario wherein Mr. Ellis is one of those finalists thing. It really feels great to know that my successor has done so much for his life as a student, a leader, and an achiever. People may say that my successor has achieved more than I do or some may even say that he's greater compared to me. I'm not gonna turn bitter or jealous on my part because I know that I have achieved something really big and worth trying. And that is... choosing and convincing Mr. Ellis to occupy the spot that I left.

By choosing him, I did became an achiever on my own because I let him realize that the world doesn't only exists and revolves around his academic excellence. I let him realize that he has the ability to make anybody into somebody through his leadership skills, instead of just being contended as a student who deserves high grades and only exists inside the four corners of the classroom. I did made a right decision and I will always remember and consider him as one of my achievements in life. An achievement that I turned someone into somebody, yet still humbles down and continues to use his talent for the benefit of the community. He is Mr. Ellis John Manidia - my successor, my friend, and my achievement!

My life did changed when he accepted my challenge because after all, I will never consider myself as an effective leader if I have failed to pass on the advocacy and the leadership skills that I learned from my predecessors and mentors - And that is the real essence of being a true leader! c",)