I just finished watching "ATM", which is a romantic comedy Thai movie. I heard of this movie before, but it took me this long just to watch it. I'm already familiar with the movie's lead actor because he is the same lead in the movie "Hello Stranger", which I've watched several weeks  ago.

Watching "ATM" is actually by chance. I really intended to watch "Hello Stranger" for the second time in order for me to blog about it. The humor and the plot of "Hello Stranger" is really good to the extent that it is worth blogging. But, I got pissed off by the low quality graphics that the current YouTube version gave me and I still can't find the other version. That's when I decided to drop it out and turned my attention to "ATM".

The movie talks about love complications within the workplace. Having relationship within the workplace is not really new. It happens in any company because of the thing called "attraction". Yes, attraction is too strong that one will find himself/herself being attracted to someone whom he/she meets and works with everyday.

The whole story focuses on the love-within-the-workplace issue and starts becoming too complicated when the guy proposes to get married. Getting married will only mean revealing their relationship publicly and that one of them needs to quit the job. The story goes on when one of their company's ATM got messed up and started giving extra money and it's their duty as employee of that bank to return those money back. 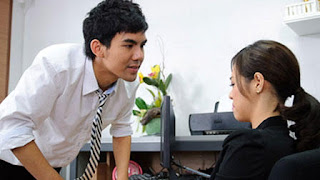 The couple decided to use the mission as their way of determining who needs to quit the job so that they can get married. The two went on the race to trace back the people, who withdrew money from their ATM and whoever wins this mission gets to retain his/her position while the loser quits the job.

The movie depicts how complicated love is especially when hidden behind the strict company rules. And just like any love story, this movie tells about making choices - to sacrifice one just to enjoy the other. I do recommend my readers to watch this romantic comedy movie because it's worth it. It's worth the time and the laughs. Fun, humorous, and entertaining are just three words I could think of at this moment. Enjoy watching!

Posted by Artistmat a.k.a. Matthew Sanchez Chua at 2:07 AM