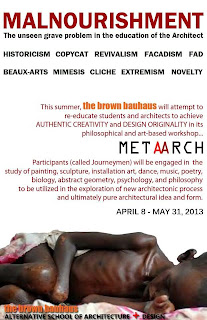 Yesterday (April 8, 2013) marked the start of a month-long creative learning courtesy of The Brown Bauhaus' Meta-Arch. Meta-Arch is the latest course being offered by the Brown Bauhaus as it attempts to create new breed of creative men and women of architecture. And these men and women, who are  eager to learn creativity at its purest form, are called journeymen.

I was given the chance to sit with the journeymen as they listen to their mentor's topic - creativity. The day was filled with discussions regarding the definition, types, and process of creativity and how it should properly be applied in architectural practice. During the discussion, the journeymen were  enlightened with the current state of architecture in the Philippines and in other countries and how it [literally] affects one's own creativity and originality.

The session ended with this thought:


"Good and creative architecture comes from a balance between carefree, fun, and play,
on one hand, and being serious on the other." 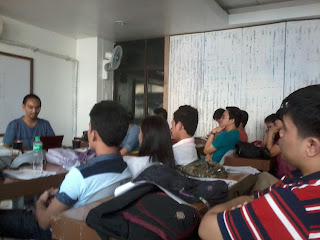 The journeymen were released yesterday full of insights regarding creativity and originality. Later, they will be engaged with another learning as Meta-Arch day 2 will begin few hours from now.
Posted by Artistmat a.k.a. Matthew Sanchez Chua at 4:22 AM